Preston Yancey has a blog. He is sometimes arrogant and pretentious there, and that annoys me. Even more annoying, though, is his habit of apologizing for his arrogance in skillfully crafted essays that force me to forgive him and keep reading his blog. I’ve been reading it for almost two years now. He keeps growing, artistically and spiritually, and it’s getting difficult to be condescending toward his condescension.

Thankfully, he wrote a memoir in his early twenties, so there’s that. 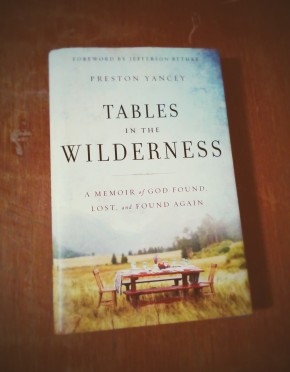 He’s just so stupid good with words. I keep trying to figure out why that irritates me, why I don’t just fall into it like I do with Billy Collins or—oh, I don’t know, Preston’s wife Hilary. He’ll be typing along, saying something profound about grace, and then he’ll mention studying iconography of the Middle Ages, and I’ll be like, “A-HA! White privilege!” because I get all of my insults from the Internet.

Basically, I think we should share our stories, unless we are younger and better writers than the people listening to our stories.

I had to read Tables in the Wilderness twice. The first time I got lost in the rhythms of things, the way Preston Yancey roams through past and present tense, the thematic returns, the cadential syntax. Then I realized I had no idea what he’d actually said, so I had to go back and be way less precious about the whole thing.

My synopsis, according to The Second Reading: There once was a Baptist teenager who went to a university where he read books and started a church. Kind of. The church didn’t work, and he started taking his spiritually confused self to an Episcopalian service. A number of people came into and went out of his life. He dated some. He met his wife, ignored her, then met her again. He wrote things and read things and talked and listened. He learned.

“God has become an abstract principle,” Yancey writes in his first chapter. “God is there the way calculus is ever truly somewhere; on paper it makes a certain sense, but in the practical, everyday application of going about a life, it doesn’t really come up as something I’m inclined to think about and respond to.”

The story doesn’t begin there, but the book does. Here is the puzzle of Tables: God is not what I had thought.

“We had to own the perspective of the work we were holding and had to critique only in so far as the text allowed us to. We were not looking for universal truths or sweeping statements, but a judicious assessment of what exactly this particular people from this particular time in this particular place were offering us.”

Yancey is a scholar, and the evidence is everywhere, from the works he quotes to the way his experiences become quotes themselves. But the study techniques he applies as a scholar are just as useful for his work as Dante’s or Milton’s. Memoir holds narrative loosely, navigating the tension between vulnerability and self-indulgence, and it would be easy to read Yancey’s Tables as a means of showing off how much he knows when in fact, he’s doing the opposite.

“I found that I spent a lot of time thinking about God and talking about God, but slowly any formal or informal dialogue with God felt more pointless than it ever had before.”

I wonder, sometimes, about the ways we define prayer. Sunday school says, “Prayer is talking to God,” so we begin by doing just that, before meals, before bed, bless the missionaries, help my brother be nice to me. Soon we graduate to “Prayer is conversation with God,” two-way communication. We must listen to as well as talk to God, whatever that means. The Bible? Our feelings? The preacher? Some songs? When we interact with God in art or nature, is that prayer? What about when we acknowledge grief or injustice?

Yancey wades into these evangelical definitions with a liturgical sensibility.  As he studies classical literature and Episcopalian observance, he demonstrates the continual labor of so many faith journeys: reconciling personal experience to external instruction and transcendent truth. His tables in the wilderness are the places where our human constructs meet with the mysteries of God.

If I were a reviewer, I would talk about how the end gets imprecise. The metaphors are a bit mixed, as if he’s trying to tie up all of the book’s symbolism in the last chapter. But that’s the problem with a memoir. It’s the story of a life told by someone who’s still living it, so there isn’t an end, not really.

There are lessons on top of lessons in Tables—but I learned the most through its language. At one point, Yancey says the reason he writes is “to share with you a vocabulary for the beauty you have seen, so that you can tell me about it, so that you can tell me that God is beautiful.” He is an advocate of both words and silence, of living in and around them, of using them well in our endless conversations about God and true things and our places at the table.

In my last year of university, I was a grader in the Humanities department for Dr. A. She became a mentor to me, asking me to think critically and consider other possibilities in several areas of my life; and being a literature professor, she also introduced me to authors and books and literary concepts. When Dr. A suggested Flannery O’Connor’s short stories to me, she told me about O’Connor’s approach to fiction.

O’Connor had a strong stance on the cost of redemption. In all of her stories there is a point of redemption, but it is always either preceded or followed by a burst of violence. (Sometimes the violence is subtle but often it’s less so, as in ‘A Good Man Is Hard to Find,’ where the grandmother shares a maternal connection with the serial killer and then—spoiler alert—gets shot to death. That kind of overt symbolism should feel contrived, but somehow, every time, O’Connor crafted it into something delicately disturbing.)

I bought the short stories, and I read them, and I loved them—but I also couldn’t read them again. They are piercing, painful things, and I couldn’t bring myself to repeat that experience. I kept the volume on my shelf for a few years then gave it to my friend M. We talked about it every once in a while, among other things, including her boyfriend L . . . who eventually joined our book conversations, married M, and began working at one of the world’s greatest bookstores.

A few weeks ago, M and I visited that bookstore, and this is the first book she and L urged me to buy.

Because this book is a journal, there isn’t really a story arc. So I read it as a collection of themes, all connected to Flannery O’Connor’s spirituality because it is, of course, a prayer journal. And the first theme is: Flannery O’Connor is Catholic.

I was raised in an evangelical Protestant faith tradition, so I’m no expert on Catholicism. What I know of it, I’ve learned primarily through books: about confession and the saints, about the Eucharist and Mary, and about suffering. There is a very Catholic approach to suffering that I’m not sure I’ll ever fully comprehend without converting. All of these things are present in A Prayer Journal.

O’Connor wrote this journal while studying creative writing at the Iowa Writers’ Workshop. In her prayers, as in her fiction, she continually connects violence and redemption. ‘Grace’ is a word she uses over and over again, grace to be allowed to pray, grace to have her prayers answered, grace to write well, grace to not get caught up in writing. But she joins this word with another when she writes, “I am afraid of pain and I suppose that is what we have to have to get grace. Give me the courage to stand the pain to get to the grace, Oh Lord.”

The theological implications are uncomfortable for me. Redemption and suffering are inseparable in Christianity, particularly given the importance of the cross. However, her words (or my reading of them, at least) suggest not that grace is given to believers who suffer, but that only believers who suffer are given grace. I’ve seen this direct association in the works of Catholic authors from Brother Lawrence to Graham Greene, and I’m always left grappling with the significance of its perspective.

Consider, though, that two years after the end of this journal, O’Connor had her first attack of lupus (SLE), the disease she had lost her father to at 15 and the one she eventually died from at 39. She got her pain—but maybe she also got her grace. Writing was incredibly important to her, if this journal is any indication, and she went on to be one of America’s best-known authors, the poster-child for Southern gothic fiction and a life-long Catholic.

I think the cost of redemption was important to O’Connor because she saw it so clearly in her own life; it’s worth noting that she had begun thinking and writing about it even at 20.

And some of her entries are so twentysomething. I love college kids (or college-age kids, if that’s too classist) because they’re such…intellectual high schoolers. There’s still a lot of dramatic emotional residue from adolescence, but they’re learning to temper it with experience. The last sentence of this quote is a gem of self-actualization:

“If we could accurately map heaven some of our up-&-coming scientists would begin drawing blueprints for its improvement, and the bourgeois would sell guides 10¢ the copy to all over 65. But I do not mean to be clever although I do mean to be clever on 2nd thought and like to be clever & want to be considered so.” (Note that this edition was edited for spelling but not for punctuation.)

The dramatic side of O’Connor reasserts itself later in the journal with the declaration that she has “ . . . started on a new phase of my spiritual life—I trust. Tied up with it, is the throwing off of certain adolescent habits & habits of mind.” I have whole journals full of this type of resolve, assertions of grown-updom that immediately disprove themselves.

But O’Connor’s spiritual struggles should be relatable to anyone who has grappled with developing a more autonomous worldview as a young adult. She works to maintain her Christianity in a setting (1950s academia) that explains faith away as a psychological crutch.

“I dread, Oh Lord, losing my faith. My mind is not strong,” she writes, and later, “Am I keeping my faith by laziness, dear God?” Difficult, important questions, questions that never really go away.

This journal doesn’t answer them. In fact, it ends abruptly in 1947, listing O’Connor’s frustrations with her spiritual habits. I’d like to think that Flannery O’Connor went on to answer them, though, not with statements but with stories.